The history of written language is a treat for anybody interested in either linguistics or the development of social relations. The system of writing serves as a window not only into the thoughts and cognitive processes of a language community, but also into the community’s economic and environmental motivations and pressures. But the fact that that window doesn’t usually offer a clear view means that writing can only serve as one piece of the puzzle.

The Ugarits developed one of the earliest alphabets, which was written using the cuneiform method of writing. This Ugaritic tablet is the earliest known abecedary, a list of letters of the alphabet.

The Phoenicians, an early Semitic culture based in present-day Lebanon, are usually credited as having invented the alphabet—a system of writing whose symbols correspond to a particular sound and can be used like building blocks to write a word phonetically. But they famously forgot the vowels: th Phncns bsclly wrt lk ths. This type of alphabet, without vowels, is called an abjad, which most Semitic languages and dialects continue to use up to the present.

Why Abjad? Vowels are redundant, say some.

The reason the Phoenicians did not invent vowels, and the reason Semitic languages have tended towards using abjads, has largely been argued to be due to the structure of Semitic languages. For one thing, the syllable structure is very simple: every syllable begins with a consonant, and never a vowel. But closely related words can have very different vowels. Consider how the following Arabic words are written:

Though they all derive from the root kharaj-, the vowels change so drastically that you can barely tell these words have any relation to each other at all. But that changes if you take the vowels out:

Not only does the relationship between these words become clearer, but if you’re an Arabic speaker, the consonants give you enough information to fill in the vowels, and even guess at the meaning if you don’t know the word. This is because the vowels follow a set of predictable patterns throughout the language:

Thus, it is argued, writing the vowels is redundant. You neither need vowels to know what a word means or how to pronounce a word.

But that doesn’t make sense…

There are two reasons that argument doesn’t add up. The first and lesser reason is how the brain processes written language. You don’t read words letter-by-letter, but rather word-by-word. It’s why you can stlil raed tihs eevn thugoh I am swtihcing the letetrs arnuod. So while phonetic spelling allows you to write and recognize words you haven’t previously learned to write, there’s no inherent cognitive efficiency in different spelling conventions.

But the greater point is that writing the vowels isn’t redundant. When I see mkhrj in Arabic, I do not actually know if it should be makhraj “an exit,” mukharrij “expelling,” or mukharraj “expelled.” This sort of thing is commonplace throughout the language and often a source of confusion in reading. In a slightly embarrassing example, I was once translating a passage out loud in an advanced Arabic class, which was describing someone’s friendly disposition. In a paragraph listing his friendly habits, I read that “he used to enjoy himself in the bathhouse.” Perhaps he was too friendly? In fact, I should have read: “he used to enjoy himself [playing] with the doves.” He was so friendly that he even got along well with animals. But the sentences would be identical in writing, and I didn’t have enough information to decide between bathhouse and doves.

In fact, the Semitic languages clearly display pressure to develop written vowels, and do so as time progresses. The script used for writing Ethiopic, a group of Semitic dialects in Ethiopia and Eritrea, was originally an abjad. But the script now requires every vowel to be written.

The Ethiopic script was once an abjad, represented by the letters on the far-left column. Now, each letter requires a slight variation in order to mark the vowel that follows.

Most students of Semitic languages are also familiar with matres lectionis, at least to a degree. These are consonants that are written to represent long vowels, such as <w> to represent <ū> or <ō>. Thus, in Modern Hebrew, the word shōmer is written as <šwmr> and not as <šmr> as one might find in Biblical Hebrew.

The process through which consonants came to be vowels was long and gradual, but permeates the Semitic languages. While the Semitic languages in their earliest forms did not write long vowels, at least all the languages with advanced literary traditions now do. Aside from Ethiopic, a couple other languages have taken the process a step further. In Syriac, short vowels i, o, and u are always written. This is largely true in Modern Hebrew, too.

This is, of course, putting aside the fact that these abjads have developed ways to write vowels in the form of optional diacritical marks.

If writing vowels were truly redundant, the matres lectionis system would not have been needed, and the diacritical system would have been superfluous.

OK, so then why the abjad?

The reason the abjad did not develop symbols for the vowels is so simple that it hurts: It’s just because vowels hadn’t been invented yet!

The Phoenician abjad had been influenced by the Egyptian hieroglyphic system, which had already developed its own abjad, albeit not independent from the rest of its logographic system. Unlike in Semitic languages, vowels in Egyptian do not follow strict sets of predictable patterns—another reason the “redundancy” argument does not hold up. 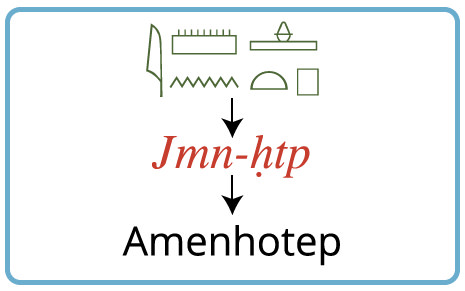 Amenhotep spelled consonantally. Despite being known for being pictographic, Egyptian hieroglyphs could be used to write individual consonants, as exemplified here.

Consonants were invented first because they were easier to identify. With consonants, your mouth closes and the flow of air is obstructed, and your tongue remains in one spot. But with vowels, your mouth is open and the flow of air remains free, while your tongue is in motion, leaving a vowel sound more difficult to define. If you speak a language where every syllable begins with a consonant, it might be difficult to conceptualize vowels as something independent of a consonant. The Arabs ended up conceptualizing them as mere ḥarakāt, “movements” of the tongue that allow your mouth to move from one consonant to another.

Imagine describing pronunciation before the concepts of “consonant” or “vowel” existed:

Easy enough. But now imagine you spoke a language where every syllable begins with a consonant. How would you answer the question “What sound is in between the ‘buh’ and ‘tuh’ sounds in ‘bat’?” You probably would not try to isolate the a sound, but perhaps emphasize it within its context: “baaaaaat.”

The first to adapt the Phoenician abjad to include vowels were the Greeks, and they did so rapidly. But it’s easy to see why. Greek has a lot of vowels! Not only do syllables sometimes begin with a vowel in Greek, but it’s not uncommon to have three or four vowels in a row. Not only could vowels be easily isolated from a consonant, but the need to write them was much greater and motivated their invention.

The Greek vowel Α,α was derived from a Phoenician consonant. Some Semitic languages themselves later derived a long vowel letter ā from the same letter, independently from the Greeks.

View all posts by Bathsheda Babbling